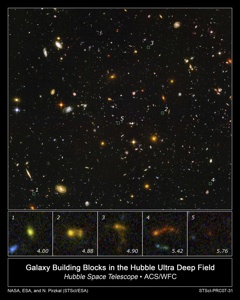 NASA has just issued a press release regarding a new discovery. What the Hubble and Spitzer space telescopes have discovered are small, dense galaxies in the distant universe (meaning we’re looking WAY back in time), that are considered to be building blocks of the Universe, and it contributes to, and confirms, our understanding of the evolution of the Universe.

This press release caught my interest, in part, due to the mentioning of ‘Lego’ the BEST toy EVER, but behind the headline lies yet another important discovery, that, to me, really demonstrates why we need to invest in Space Telescopes, there’s so much to learn.

This is a quote from the NASA press release:

A NASA’s Hubble and Spitzer space telescopes have joined forces to discover nine of the smallest, faintest, most compact galaxies ever observed in the distant universe. Blazing with the brilliance of millions of stars, each of the newly discovered galaxies is 100 to 1,000 times smaller than our Milky Way galaxy.

“These are among the lowest mass galaxies ever directly observed in the early universe,” said Nor Pirzkal of the Space Telescope Science Institute in Baltimore, Md.

The conventional model for galaxy evolution predicts that small galaxies in the early universe evolved into the massive galaxies of today by coalescing. These nine Lego-like “building block” galaxies initially detected by Hubble likely contributed to the construction of the universe as we know it.

JPL is the NASA body that manages the majority of the robotic missions to the planets and the solar system, this includes the highly successful Mars Rovers, Voyager, Cassini. You can subscribe to the NASA JPL newsletter by visiting this link