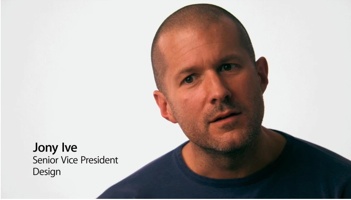 Yesterday, the 14th of October 2008, Apple had an event titled “The spotlight turns to notebooks”, where they unveiled a refresh of the MacBook Pro, a new version of the MacBook in aluminium and a new Cinema Display.

Clever spin
All of these announcements were already confirmed and leaked days before the event, Apple can’t or won’t, contain the leaks, and the new strategy seems to be to use the leaks to drive the hype.

Remembering how secretive Apple events used to be, I sort of, expected Steve Jobs to pull something out of the sleeves of his turtleneck, “one more thing”, but he didn’t, or did he?

One more “thing”
One notable thing about the event was that Steve shared the stage to such a high degree. This is a trend that has been going for some time, especially when it comes to events that focus on the Mac, it’s a bit like Steve isn’t that passionate about computers.

Luckily others are, and at this event Jonathan “Jony” Ive shined – and I’m not referring to the reflections from his shaved head.

It was simply a thrill to see this low-key, soft-spoken, man talk about the manufacturing process involved in producing the new MacBooks, the attention to detail, the months spend refining the new trackpad etc. etc.

Over the years, speculation as to who might take over the position as CEO of Apple after Steve Jobs, has been growing, and my first reaction was that I’d love to see Ive in that position, he’d be a natural.

But really that would be such a shame, so I’m convinced that Ive will stay in his current position, and there’s many more iconic designs hidden in that shiny bald head of his.

So watch the video where Ive talks us through the manufacturing process of the new MacBooks, it’s simply breathtaking.

Risky strategy?
The MacBooks themselves? To me they ooze quality. Apple has obviously decided that they will not address the current trend towards cheap notebooks, aka. netbooks, when asked Steve called it a “developing market”.

The strategy is risky, it defies the market, but I welcome it, and it will only mean that Apple will grow it’s market share in terms of revenue, instead of units moved. With these new notebooks, there’s no doubt that Apple owns the high-end market, and that’s where it’s the most fun, and profitable, to be.

The old MacBook product line has been plagued by quality problems, hopefully the new MacBooks addresses this, I’ll bet that this is the case, these are, to me, the first true Intel based notebooks, designed from the ground up for the Intel chips.

The picture of Jonathan “Jony” Ive, that accompanies this article, is a frame from the video issued by Apple for the launch of the MacBook Aluminium, it’s Copyright Apple Inc. I hope that my use here is considered “Fair Use”.

Currently the video is available on the Apple Website here, it’s likely to be moved, and it’s a good guess that it’s already on YouTube. The video is produced much like a documentary, really professional marketing on Apple’s part.

If you are into industrial design I suggest you: http://www.objectifiedfilm.com/

Yes I’m looking very much forward to it, I really enjoyed the Helvetica documentary by the same filmmaker, Gary Hustvit, it even inspired me to do a blogpost: ICT Mythbusters Episode 2: Attack of the Clones! Or Is Microsoft just copying Apple? Or A Tale of Type

BTW, I’m now the proud owner of a MacBook, got the big model in December 2008, and I love it – there are some issues with the trackpad, but it will eventually become mainstream, as soon as we begin to see apps that support it