The Danish Drupal community, Drupal Danmark, organised a miniconference, DrupalCamp Copenhagen, in the weekend of the 15th and 16th of November 2008 at La Oficina, a new – FANTASTIC – co-working space in Copenhagen

Show your <3 for Drupal
People that know me, also knows that I’m a big fan of the Content Management System (CMS) Drupal, and I constantly push it.

One of the main reasons I LOVE Drupal is that it, besides the pure open source license <3, also tries hard to support standards, rather than doing “clever” things in core. This is in strong contrast to other tools, that attempt to make it easy for the user, but then locks you in.

Personally I love HTML and the constant cry for a rich editor in core is lost on me, but then again, I’m writing this using the off-line client ecto 😉

A restless 2008, but where’s the inspiration
2008 has been an amazing year for me, and I’ve attended several events that should have made me so inspired that I’d blog up a storm, but somehow this failed to happen, and I was reluctant to sign up for DrupalCamp Copenhagen, because I was also involved in the organisation of BarCamp Copenhagen the following weekend – I was afraid to overcommit myself, resulting in me burning out.

It turned out that I was “pushed” – nah let’s say inspired – to sign-up by a guy I’ve never met in person, but knew well from the Danish Mac community.

“Unfortunately” I got so inspired that I even had the audacity to suggest that I should host a session at DrupalCamp Copenhagen – oh no what a fine mess I got myself into, this happens every time I get inspired, like I said, I tend to overcommit myself.

Then all was quiet for a while, like forever, and DrupalCamp Copenhagen was only four days away, when a preliminary schedule was sent out to the participants, which, by the way, was now exceeding the capacity of the venue, pretty Fanø amazing!

Hmm, my session wasn’t on the schedule, ok, I guess I don’t have to prepare anything then 🙂

So you want to be a Drupal Star, well the stage is yours!
On Wednesday night the final schedule was sent out, and lo-and-behold, my session was actually featured, “Using Drupal as a Web Application Framework“, hmm I’ll be addressing a bunch of hardcore Drupal professionals, and they have payed a fee, albeit a nominal one, to attend, but still this is the first time ever that I was to address a paying audience, pretty daunting when you think about it.

So I started thinking hard about the theme of the session.

When I sugested the session, I had promised that the session would be much more of a participatory session, than a presentation, and that I was hosting it to learn from the failures I had trying use Drupal as a framework for web-applications.

In my mind a different idea began to take hold, one that focused on the things that I learned, and was succesful in achieving instead of focusing on the failure of my projects.

I decided that I’d start by asking the question: “What is a web-application?”, and inspired by one of my “failed” projects, I decided that I’d do a walk-through of how you could build a Twitter like site without any, or close to no, coding on your part.

Twitter is the perfect candidate for demoing a web-application implemented using Drupal, since it’s all about content and simplicity. Strangely enough my choice of Twitter as a model for a sample aligned itself perfectly with the Miki’s session, Modules 101, on Sunday, even though he took a different approach than I did, and actually did a fair amount of coding.

One could have the idea that we had co-ordinated this, we hadn’t, so I’ll just rack it up to coincidence, and the fact that Twitter is the second most hyped thing on the Internet these days.

Guess what, I’m the hero

I won’t go into serious details about my session, but it saw me show praise for open source and Drupal, do a hands-on step through of how to build a Twitter clone, called Droopy, and demo my first Mac OS X Cocoa application EVER!

Droopy is a fictonal web-application, the name was inspired by the Tex Avery cartoon, but it also sounds like Drupal.

Droopy allows you to post microblog content using a simplified form. Microblog content, or “Droops”. A “Droop” is a standard Drupal content-type, that you can submit to the site by using a custom form. Implementing the form took some 10 lines of code to implement as a module.

At your service
The real star of the show was, however, the wonderful Drupal services module. If you install the services module you can access Drupal using a varity of web-service standards, but as default it support XML-RPC, so that’s what I focused on.

The services module implements a number of methods that you can use, I focused on the node and the user services.

One of the nicest features of the services module, is that it has a nice UI for browsing and testing the exposed services.

A KISS from Droopy
You can, of course post content using /node/add/droop, but like I said I’d like to do that a little smarter/simpler, so for that purpose I developed a small module that utilises the Form API to implement a simplified data entry-form to post the content-type a “droop”.

This was quite simple to do, the only problem I had was that I wanted to tag my content (flat taxonomy), and in order to do that, you can’t simpy use the standard mechanism to save a node, this is how I implemented a method to create a node programatically including creation of tags, the vid that is hardcoded to 2 might be problematic, but the thing to focus on is the line:

In order to have the custom form show up, I decided to do a theme hack, this could probably be done much cleaner, but it’s really simple to have a form show up on a page.

Below is a screenshot of a simple theme that shows the simplified form:

Fat client
I already had a functional XML-RPC client written in PHP, but I wanted to do something a little smarter.

Fundamentally I believe that the web is extremely ill suited to host applications, what you can do with a full client that has direct access to the rich presentation services that the operating system exposes, is just so much easier to develop, than trying to support x-number of browsers. I’m a huge fan of applications like iTunes, since they combine webcontent with a fat client, I think that’s going to comeback in a big way, powered by the mobile platforms, that, due to limited resources, forces us back to writing applications that tagets specific platforms.

In my daily job I work with Microsoft .NET on a standard Lenovo pc, but when I’m at home, I swear by my beloved PowerBook G4 12″, and that doesn’t run Windows and Visual Studio, so how could I develop a fat client to use to demo how to shout “DOWN BOY!” to Droopy, I had never ever had any success developing for Mac OS X? OTHO, that was a challenge, and I love those, even though this was now late Friday morning, and my presentation was less than 48 hours away!

Schizoid development platform from the last century
Development for Mac OS X is strange, Apple does bundle the development tools you need to target Mac OS X with Leopard, but that’s basically where the help stops.

So I knew that I need to enlist the help of Google, and I already knew what I was looking for, so how difficult could it be, well it turned out that it was.

For one, development for Mac OS X is not very widespread, but I did manage to find a number of samples, one of them implemented what is know as a framework, which basically extends Mac OS X with additional features, but hey, I just wanted to call a service using some simple XML that I wanted to post using HTTP, did that really require a framework?

Another strange fact, was that the samples I found were really old, but I found out that Mac OS X actually contains some nice high-level APIs that you can use to call web-services, they’re all prefixed with WS, for instance WSMethodInvocationCreate, WSMethodInvocationSetParameters and WSMethodInvocationInvoke, the strangest thing about these interfaces was that I saw several warnings against using these functions, strange. 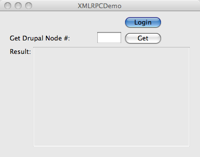 Oh well I manged to find a suitable sample here: Ranchero Software: Cocoa XML-RPC Demo, and I managed to change it so that I could call the node.load method exposed by the node service, but this was when trouble arose.

The node.load service allows you to supply a list of node-fields that you want to to have returned, if you supply an empty list, you’ll get all the fields. I tried several things, to no avail, my service kept returning node not found errors, this was a problem that I never manged to fix.

The problem has something to do with the way Apple’s API serialises it’s parameters, Drupal is expecting a list, that will get de-serialised into a PHP array, I couldn’t get that to work.

I then decided that I’d try to interface with the user service instead, and that faired better, and I manged to login to Drupal from my client, heavenly bliss :-).

OK, next step would be to add an additional button to my client, called “Login”, and have two buttons in my application, this was when I hit rock-bottom, I just couldn’t figure out how to hook up an InterfaceBuilder push-button with an Objective-C eventhandler.

This is something that is super-simple to do with almost any other development tools, why oh why has Apple decided to stay in the 80ies, I want a double-click in the designer to generate a stub and open my event-handler code in the editor.

Oh well, my application works, but I think that I’ll follow the advice, and stop using the WS* APIs, and start interfacing directly with the HTTP POST API, and serialise/deserialise the XML myself, another benefit of this approach, is that it’ll also works on the iPhone 😉

Below is the code required to do a login to Drupal using XML-RPC from Mac OS X.

Thank you to the organisers
DrupalCamp Copenhagen 2008 was a tremendous success, 100 people, including visitors from as far away as Canada, a venue filled with energy, amazing sessions, especially the sessions hosted by Miki and Acquia filled with practical advice, but it’s also amazing that the Danish newspapers showed up, ready to share their experiences on how to performance optimise Drupal, I guess that print media is finally getting the Internet and the concept of open and free, and it fills me with optimism!

I’m now ready to face the world with renewed faith in Drupal and my own abilities to put it to use, gentlemen start your Drupal engines!

Come to think about it I should have named my Twitter clone, Sylvester, OTOH Sylvester never manages to catch “Tweety Bird” does he 🙂