This blog-post documents the process involved in solving a strange problem in Microsoft Visual Studio 2008.

When I say “worked for me”, it means that it might not work for you, but the problem is likely to be caused by another missing DLL.

Frustration
For days I was struggling with an error that meant that I couldn’t debug web-applications from Visual Studio 2008, if I tried to debug a web-application, it would simple show a stack-dump that stated:

The specified module could not be found. (Exception from HRESULT: 0x8007007E)

What made it even more strange, was that we had a completely identical computer, in terms of hardware and operating system (Windows 7 64-bit), that didn’t show this behaviour.

The most wonderful thing about the error was that it stated that a specified module could not be loaded, but it didn’t tell me which? Great!

Google to the rescue? Not really! Since this is a very generic error, and a lot of people seem to be experiencing it, and I couldn’t see any pattern in the answers people came up with.

First I tried to reinstall Visual Studio 2008, and, as I expected, that changed nothing.

From Google the evidence was piling up, some file(s) was missing, but why was it working on the other computer.

I clearly needed the help from some tool A tool called “Dependency Walker” (http://www.dependencywalker.com/) was suggested, and it told me that I was missing the files GPSVC.dll and IEShims.dll, but both files were present on the system. GPSVC.dll in a 64-bit version though, IEShims.dll was present in both a 32-bit and a 64-bit version.

Process Monitor
My next idea centered around the fact that a file was missing (DOH ;-)). I knew of a utility that can monitor file-system access, I just couldn’t remember the name, and Google wasn’t immediately helpful, eventually I found a mention of “Process Monitor” (http://technet.microsoft.com/en-us/sysinternals/bb896645.aspx), and that seemed to be what I was looking for.

“Process Monitor” shows that there’s a lot going on, so I started experimenting with the filters, the easiest way to configure a filter is to right click on a message that looks irelevant, and then select “Exclude”, the right click is context sensitive to the column you’re clicking on.

I quickly focused on the events with the Result: “PATH NOT FOUND” and since I was looking for file-system access, I excluded all events where the Operation was begining with “Reg”, meaning a Registry access.

I suggest that you look for attempts to load a file by traversing the “PATH” environment.

Solution found: MSCVR71.DLL was missing
There was a lot of activity going on, but ended up focusing on a particular file: MSCVR71.DLL, and it was indeed missing

This screen-shot from Process Monitor highlights the problem when the MSVCR71.DLL file is missing: 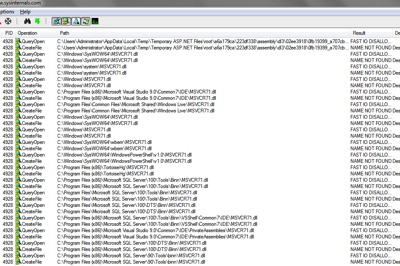 After I copied the MSVCR71.DLL file to a location where it could be found by Visual Studio, the problem disappeared.

So why didn’t we see the error on other computers, with a seemingly similar configuration? It’s because the MSVCR71.DLL is distributed with several other software packages, and on the computer where Visual Studio 2008 worked, MSVCR71.DLL was installed with two packages: “Java Runtime Environment JRE6” and “DropBox”, and the installers had added these to the PATH environment variable. Since these packages might be found on many developer-machines, this could explain why this problem is not showing up more often.