Microsoft is releasing public betas by the dozen, it’s actually quite amazing, and they no longer require too much of a registration process or non-disclosure agreements, but I’m sure that it helps that I have a Windows Live user id, the thing that used to be called Microsoft Passport or .NET log-in services. So I registered and begun downloading betas from the Microsoft site. First in line was Internet Explorer 7.

So why did I, who publicly questioned the need for Internet Explorer, become a beta tester for IE7? Well it started with a post on macnyt.dk (surprise)…

macnyt.dk is a Mac related site, but yesterday an article on the availability of Internet Explorer 7 Beta 3 surfaced, and that started an in-fight. Did this article really belong on a Mac site? Probably not!

But then I remembered my poor old Windows box that was gathering dust, and the main reason I have it is to have a testbed, it’s running Windows Server 2003, with basically everything under the sun installed on it, and it still has lots of room for more stuff, and when somebody actually asked if anybody had tested Internet Explorer 7, I went ahead and downloaded it, and that was very easy to do.

For one it’s a quite small download, only a 12.8MB, but I did notice that it seemed like it downloaded some extra components during the installation process. 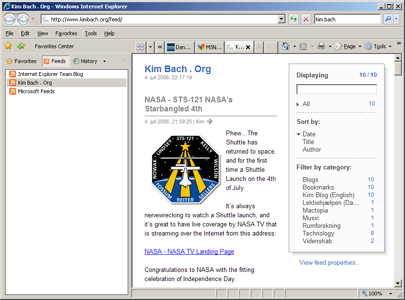 The first thing you notice is that Microsoft has done away with the menu-bar, this is a wise decision, since most web-sites implement their own user interface. I did enable the menus, which is easy to do, because I needed access to the more advanced features, and felt more comfortable having a menu-bar, but it’s probably just an old habit. You also notice that a search box has been added, this is initially configured for Windows Live search, but it can be easily reconfigured, and yes the main foe of Microsoft, Google is listed as an optional search engine. I haven’t seen a better implemented search engine configuration option.

Another noteworthy change is the navigational drop-down box. It’s shows both forward and backwards history in one list, marking the current page with an arrow, I expect other browser vendors to copy that feature, it’s actually a very good idea.

My initial reaction was that IE7 is running really fast, but I was most interested in assessing IE7’s RSS support. I must admit that I’ve impressed. The RSS support in IE7 runs circles around the support in Firefox, with it’s simple live bookmarks. IE7s implementation of RSS support, seems to be quite inspired by Apples Safari, copying a lot of Safaris features, and that’s not a bad place to look for inspiration. I do miss the slider in Safari that “zooms” between showing the full description and a headline, this is, for instance, useful when working with feeds from MediaWiki’s “recent changes” page, since the description is very detailed when displayed in IE7.

And notice the small, but interesting fact, that Microsoft has adopted the Mozilla standard icon for feeds. Apple is using an icon that says RSS. I’m not sure what I prefer, but I think that feeds are developing beyond RSS, adding richer and richer features, so I agree that it is correct to use the generic term “feed” instead of “RSS”. While the Mozilla icon isn’t the best designed in the world, it good news that there’s now a consensus, and we can start spreading the good word about the blessings (and benefits) of feeds.

When a page has an active feed, the feed icon turns orange instead of grey, when you click the orange icon, you open the feed, if you want to subscribe to the feed

But IE7 does Safari at least one better, by adding filtering by category for feeds that contain categories, and since this is something most webblogs has, it’s a really useful feature.

It looks like the Microsoft IE developers really had bloggers in mind when they developed the RSS features, in the picture (click for a larger version) you can see that I have 10 posts in 9 categories, if you click a category only the posts in that category is shown – that’s a powerful feature.

The main reason I’m still using Internet Explorer is for my Internet banking needs. I use the Internet bank provided by Danske Bank, and it uses an ActiveX component for it’s security. Danske Bank does support all browers and platforms by using a solution called ActivCard. The ActivCard is a hardware device that generates temporary passwords. This is a very secure and portable solution, but it’s quite cumbersome.

So I transferred my access keys to my IE7 testbed, installed the ActiveX component, and Danske Bank ran like a charm, as always you have to install the Java Run Time environment separately, the graphing tools provided by Danske Bank requires Java. I haven’t installed Java yet, but I’m confident that it will work. 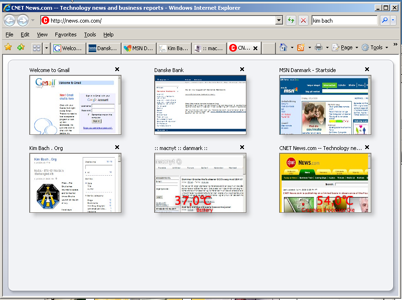 New to Internet Explorer is the mainstream feature from competing browsers, tabs. Tabs is a great addition to the browser experience. Tabs really is the return of the good old Multiple Document Interface (MDI), but this time done right, tabs is a metaphor most people can relate to. The ability to work with several documents, within one application (MDI) was ahead of it’s time when it was introduced in Windows 3.0, and it was also hurt by its poor and illogical implementation.

To help gaining an overview of the documents you are working with, IE7 introduces an Exposé inspired feature where you can display all the open tabs in one screen, it’s a nice addition, Firefox has third-party plug-ins that offer this feature, but it’s nice to have it included in the box.

All in all my first experience with IE7 is very positive, it’s fast, powerful and it matches the competing browsers in features, while maintaining backwards compatibility, it looks like a winner, and with the great support for feeds, this will finally become a mainstream feature.

So far I’ve tested it with the Acid2 test which IE7, to my great disappointment and surprise, failed miserably, but hey only Safari and Opera passes this test, Firefox fails as well, but IE7 is really far off.

I then tested IE7 against the site gf-forsikring.dk, the web-site of a Danish insurance company, with well documented rendering problems with anything else but Internet Explorer, which means that the company utilises user-agent detection to limit access to Internet Explorer clients. IE7 was allowed to access gf.forsikring.dk, but it failed to render the top navigational menu. This wasn’t really a surprise, since gf-forsikring.dk is using a very old DHTML component for their menu, but this might help GF-Forsikring realise that they should fix their code.

Another site with well know problems when using anything but Internet Explorer, foetex.dk, the web-site of the Danish supermarket Føtex, renders perfectly in IE7.

I hope to be able to test some sites that had problems rendering in IE6 in the coming days, IE6 had several bugs, for instance with CSS and transparent PNGs, to access the standards compliance of IE7.

BTW…In case you wonder…I’m not sitting in front of a boring Windows box when I’m testing IE7, no I’m running VNC against my Windows 2003 server from my trusty PowerBook G4 12″. My Windows box doesn’t even have a screen, mouse or keyboard attached. No need for BootCamp and Parallels, that’s Windows the way it’s supposed to be!

Thanks for writing up your experience and opinions. Great for me to read this. If you have any more specific feedback pls feel free to send me mail directly. thanks!

You have a point, it’s just beause I already had a Windows Live account due to my MSDN registration, that I didn’t really feel intimidated.

Microsoft does indeed ask for a lot of information, but hey I trust them…Or…