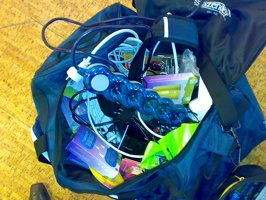 BarCamp Copenhagen 8.2 on the 22nd of November 2008 is over, THANK YOU SO MUCH for being such a great crowd.

I’d like to extend a special thank you to the sponsors (Signal Digital, Københavns Erhvervs Akademi, Nabz.dk, basementcopenhagen and Toothless Tiger), Ras Bolding and our fabulous team Henriette Weber, Thomas Kristensen, Anders Bendix, Troels Wittrup, Benjamin Wendelboe, Laura Kiralfy and Mark Wubben – you ALL rock, and you KNOW it!

BTW! We’re trying to build a community site at barcamp.dk, so check back often for updates

Pre-camp game
I’m a 3 time veteran of BarCamp Copenhagen, and this time I had multiple roles, primary Henriette challenged me to host a pre-camp game, and this article is focusing on how that unfolded.

My roles were these:

Phew! I think that’s about it, no wait, I also found time to be a participant!

“Un-conference”
For those of you not familiar with the concept, BarCamp Copenhagen is part of the world-wide phenomenon BarCamp, and can best be described as a conference with a twist, a so-called un-conference.

I’ll try to illustrate the differences between a conference and BarCamp below.

Technological treasure hunt, huh?
My major contribution to BarCamp Copenhagen 8.2 was being organiser of the pre-camp warm up.

As mentioned, the task of organising a pre-camp warm-up was given to me by Henriette Weber, she had envisioned a “technological treasure hunt”, and I immediately jumped at the chance, but what to do?

Technology and treasure hunt, we’ll that should be something with GPS, isn’t that something you can assume that people have these days?

After looking into what existed in the market, and even considering if we should try to build our own, I was sort of stuck for at while.

I suspect that Henriette was getting a bit worried, so she sent Mark Wubben to the rescue, and that was great! Mark is probably the coolest guy I’ve ever met, and it’s hard to believe that he’s only 22. Mark is destined for greatness, and I’m humbled by his presence!

I quickly started down an avenue of sending the participants out to research the history of the neighbourhood where the event was to take place, but Mark, in diplomatic terms, told me that that sounded too boring, I instantly agreed, it did sound like a school project didn’t it? I guess my short career as a school teacher had a bad influence on my creativity ;-).

Brainstorm
On October 28th I met with Mark, and he made a couple of important points.

We had a great brainstorming session, and immediately we were turning in the direction of spies, conspiricies etc. Mostly because I instantly made the connection to November 22nd and the mother of all conspiracy theories, since November 22nd is the day of the JFK assassination.

So what we came up with was the concept of a spy-game where you were supposed to find an assassin, take a picture and return with it to the headquarter.

The assassin would be meeting with a contact at an undisclosed location, I thought of Nørrebroparken because it has a “grassy knoll” ;-).

The participitants would be divided into teams, and then sent around in the area looking for codes that, when found, should be relayed to HQ, resulting in another hint about the whereabouts of the assassin.

Planning
On the 8th of November Mark Wubben and I met to investigate the area, and we found several places that would be suitable for waypoints, we decided that Nørrebroparken would be too far away, since we only had two hours for the game, and wanted 5 hints/waypoints.

I didn’t really work too much on the detalis of the game, after the 8th, but when the 22nd of November approached, I suddenly decided that we needed a website to support the game, and what you can whip together in two shakes of a rats tail using Drupal is just amazing, I had a full community site with full geolocation support up and running in a few hours.

Calls for participation
Approx. one week prior to the event, we issued an e-mail with a call for participation, and people were asked to sign-up for the pre-camp event, this was before I had configured the website, so I received a possitive answer from a few people.

Teaser
On the eve of the event, I then sent out this e-mail to the people that had responded to the call for participation:

You’ve been selected as a prospect to lead a team at BarCamp Copenhagen.

You will be given a mission that requires that you operate as a field agent from 10am to 11:59am.

Any technology you bring can potentially help you, but you’ll need, at least a camera and a cellphone.

Until then you can get updates at the barcamp.dk site, so check back frequently. http://barcamp.dk/content/barcamp-copenhagen-intelligence-agency

If you choose to accept the mission I’ll need your cell-phone number.

I received commitment from 4 people, I picked them as team-leaders, so that we would have four teams, and now I started building the website, having specific locations geocoded on the website helped me produce nice maps, so all I needed was to finalise the plot.

In the week leading to the event I had enlisted two of my friends to act as agents, and one of them is an experienced role-player so she helped me debug the game, she suggested that I should get rid of the good/bad distinction, and focus on making it much more confusing what was good and bad.

We met the night before BarCamp and decided that the mission should be for the teams to located the whereabouts of an agent, deliver documents, that they should document the handover of the documents, and return to base. What they weren’t aware of was that there was a second agent operating, and that he should steal the documents and disappear.

Hackable game
As mentioned, Mark Wubben tought me the importance of the game being “hackable”, this means that you should be able to bend the rules, so what I came up with was this:

The plot
I ended up with a plot where the participants were sent out to locate field agent Szeba, they would be guided by hints that were given to them once they had gone to a waypoint and located the access code and sent it by SMS to HQ

The twist
What the participants didn’t know, was that I had also enlisted another agent, Petrus. The idea was that the agent would steal the documents once they were delivered to agent Szeba.

Game-on
On the eve of the evening I met with agents Szeba and Petrus (aka. Signe and Kim, thank you for helping me, you guys rock).

We went over the plan.

Szeba would be at Nørrebro Station at 11:30 waiting for the documents, Petrus would be lurking, wait for the next train, steal the documents and jump on the train just before it left.

We were ready for the game – mu-ha-ha-ha – it will be GREAT!

Stay tuned for the part two of this where you’ll be told how the game actually unfolded.

The picture that accompanies this article was taken by Karin Høgh, it’s copyright Karin Høgh and she has allowed me to use it here. The picture shows one of my bags!