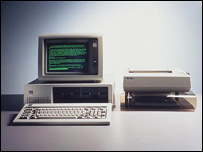 Today marks the 25th anniversary of the IBM PC. The PC, not only in the meaning of a “compatible”, has had a tremendous impact on the life of almost everybody in the developed world, and it’s now spreading to the rest of the world.

Personally I’ve been using IBM PCs and compatibles since December 1983, my father got one of the first IBM PCs that arrived in Denmark, and it has in many ways shaped my life.

The success of the PC is owed to an originally open hardware and software specification. When IBM tried to close the PC, realising what they had done, it was too late, the market had gained control of the standard.

When IBM designed the PC they made some remarkable decisions:

IBM didn’t really believe in the idea, and hard pressed they created a division called the Entry Level Systems division headed by the legend Don Estridge, and ELS was given quite free hands, even being located physically outside the IBM buildings, IBM hoped that the PC would just be a fad.

One thing ELS decided to do, was to break completely with the typical IBM thinking, that was based on Closed and Not Invented Here (NIH) syndromes. For instance: the IBM PC was build entirely from off the shelf components.

But the most important decision was to publish the hardware design, making it possible and easy to build IBM PC compatibles (clones).

To top all of this, the full source-code of the BIOS (Basic Input/Output System) was also printed in the manuals.

The BIOS was Copyright IBM, but having the source code available, made it easy to develop versions of the BIOS that didn’t violate the IBM copyright.

IBM finally acknowledged the PC, and decided to shut down the ELS, and integrate the PC into the organisation, when they 5 years later announced the death of the PC and introduced the PS/2. Don Estridge had tragically died in a plane crash in 1985, shortly after IBM had decided to close the ELS.

To the dismay of IBM, the PC didn’t die, and the PS/2 that featured a closed hardware architecture, the micro-channel (MCA). Clone manufacturers could license MCA, but it was expensive and technologically complex, requiring the industry to retool.

IBM discovered that it no longer was the trend-setter. The PC had gained critical mass, and could no longer be controlled. The last two standards that IBM forced were 3 1/2″ diskettes and the VGA, that were introduced with the PS/2, but the MCA never gained any wide acceptance, and faded into oblivion, when IBM eventually killed the PS/2 and embraced industry standards, like PCI, eventually bringing back the PC name to their products.

Last year IBM sold the PC hardware division to Lenovo, marking the end of an era.

What will the future hold. Well the form factor of the PC hasn’t changed much over the last 25 years, with the exception of the notebook, this is something that is likely to change. The vision of a computer on every desktop came through, now we need to break away from the desktop, and this will mark the end of the desktop computer, but the PC is here to stay. In the Danish language PC is written pc, it is no longer an acronym, but a proper noun.