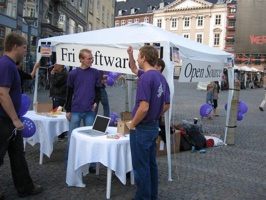 Saturday I was on the street to promote the use of open and free software at an event in Copenhagen Denmark. The event was part of the Software Freedom Day 2006.

We were standing on the main pedestrian street at Gammel Torv (The Old Square), and yes once again my PowerBook was flashed, this time running Ubuntu – really strange that no one else brought a laptop – and for most it was a first seeing Ubuntu on a Mac, and it runs really really well.

We were handing out Ubuntu CDs and balloons. Activism is really great, and I’m getting better and better at it.

We’re slowly spreading the word about the alternatives to commercial software, but will anybody actually install Ubuntu and switch? Probably not, but I think that I managed to inform at least a few people about the concept of free and open. You’re not a criminal if you copy and distribute open and free software. Unlike the huge companies from the US, we actually WANT you to copy it.

Some people asked why we were doing it. I think that there are many possible answers, but for me information want’s to be free, and the Internet is the greatest invention since the printing press, access to the Internet should be free, and handing out free software that make that possible could help achieving that. Lowering the bar on Internet access could help democratising the Internet.

I tried to explain the concept of “the beer isn’t free” to a girl, by saying that she could buy the developers a pizza, she offered to buy me one, I said that I didn’t really look on myself as a representative for the movement, she should rather go to the donations page on OpenOffice.org, but you can’t really get a pizza through their mail slot can you?

The greatest result from this event, on the personal level, was that I meet some people that share the same passions that I do, and we co-created this event – I also discovered that I’m probably more of a politician than a geek.

I’d like to change a few things…Linux is important, but probably too complicated, OpenOffice, Firefox, Gimp and Gaim are much more important projects for the end user, since they don’t have to switch their entire platform. The print on the Ubuntu CD actually reads something like this: “The default installation will destroy the data on your computer”. OUCH! I’d also like us to have install instructions in Danish, and I should have brought my translation of Manu Cornet’s website PC-hijacking.

But the beer was actually free: A guy that passed by shared his, just like in the old punk days. To top it, Gammel Torv was the main hang-out of the Copenhagen punks in the early 80’ies.