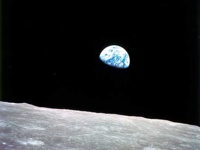 I’m so envious my dear brother, this day October 4th – your birthday – seems to coincide with one of the most important days in modern civilisation, a day that has importance for exploration of space, as well as important steps in the history of human thought and the move towards true democracy.

Today, October 4th 2007, it’s 50 years since the first man made satellite, Sputnik 1, was launched, and the world was changed almost overnight. 12 years later man had already walked on the moon

The first stage of the race towards space, has to be one of the single most impressive feats of human kind in history, really on a par with the building of the Pyramids.

Building of Pyramids was, like the space program, put on hold – it was just not efficient, even though the monument still stand, in the form of immense launch facilities at Kennedy Space Centre, it was only really a demonstration of power, and funding had to be cut, or else it could have ruined the economy, like continued pyramid building could have done to Egypt

Flash forward 47 years, three years ago, the era of real space exploration of space was ushered in, with the successful flight of SpaceShipOne, the first commercially developed vehicle, capable of reaching space.

So happy birthday to you all, and humanity for giving us the inspiration to do the impossible, which is escaping this cosy spaceship we’re all living in, or should I say on, the spaceship called Earth.

ps. I also found out that today marks the 23rd anniversary of establishment of The Free Software Foundation (FSF) by Richard Stallman. FSF and the thoughts behind it is slowly changing the mindset of people, and is the foundation of the current explosion in true knowledge sharing. Today also marks the 14 anniversary of the failed attempt by the Soviet military to stop the move towards democracy – October 4th truly is a historic day.

pps. If I had the energy to do so, I’d love to have made a picture showing the faces of Sergei Korolev, Burt Rutan, Paul Allen, Richard Branson, Richard Stallman, Boris Yeltsin and my brother René, to accompany this article – sorry but you have to make that – mentally – yourself.

Instead I’m showing one of the most important pictures of mankind, the “Earthrise” picture taken by Apollo 8, just a little over 11 years after the Sputnik 1 launch.

“We close with good night, good luck, a Merry Christmas, and God bless all of you — all of you on the good Earth.”